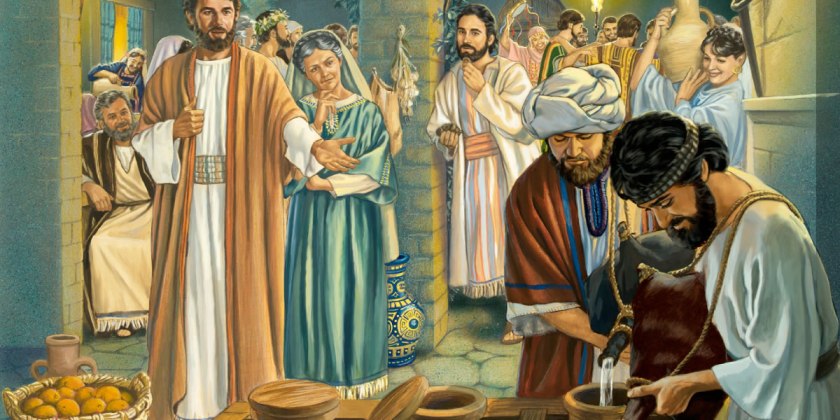 Written on the occasion of the wedding of my Cousin Debbie and her groom Larry, March 29, 2007 . This was not a first marriage for either of them.

I believe it is significant that Jesus’ first miracle was performed on the occasion of a Wedding Party.

In those days, a Jewish wedding party could go on for many days and was planned for a week. In reality it lasted as long as the food and wine held out. The groom’s family would serve the good wine first and switch to a cheep wine once people were too drunk to notice the difference.

On the occasion of Jesus’ first miracle, the wine ran out just hours after the start of the party, not just the good wine, but all the wine was almost gone. It was considered more than an embarrassment to the groom’s family to run out so quickly because it broke the strong but unwritten laws of hospitality that the Jews had lived by for centuries.

Mary asked Jesus to do something. She couldn’t have known her son would perform a miracle and probably thought he and his disciples would use their resources and influence to get more wine. But, Jesus told the servants to fill several 20 or 30 gallon jugs with water, and he performed his miracle.

When this new wine was served, the Master of Ceremonies (the wedding planner) was pleasantly surprised and congratulated the Groom for saving the Best Wine for Last. *

I believe that in the lives of Larry and Debbie, Jesus saved the Best for Last.

To Larry and Debbie; may your lives together be a miraculous example of true love.

* taken from the Gospel of John, Chapter 2