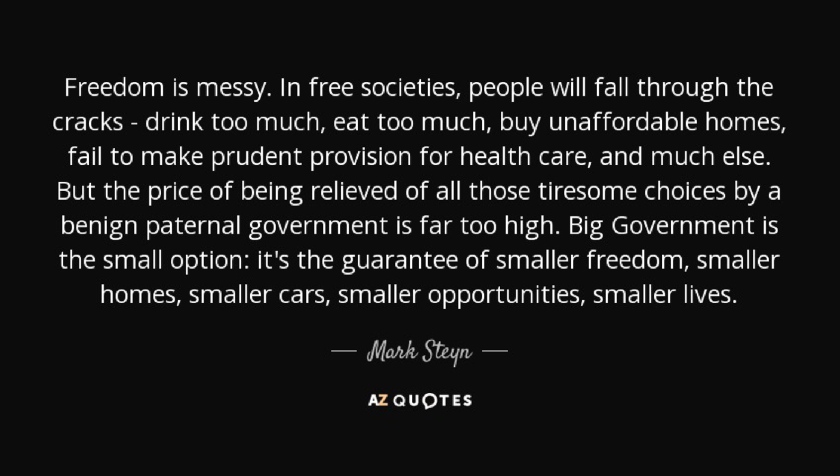 Is the permanent loss of Liberty really “for the greater good?”

I initially likened this COVID-19 crisis to The Great Depression because the consequences of sustained economic inactivity carry with it its own set of threats to life, livelihood, and well-being. People tend to minimize or wish it all away, but these threats are real and entirely outside the expertise of health experts, the NIH, and the CDC.

Damage to our economy has already been done beyond any hope of a quick recovery.  We must return to some semblance of normalcy and get back to having no official restrictions very quickly, or the negative consequences caused by our response to COVID-19 will ripple through society for years, if not decades to come. And this, more than anything, will prevent us from adequately preparing for the next crisis.

In this COVID-19 crisis, there have been some over-reactions, some under-reactions, and many fear-based responses. But as a result, we not only have a looming economic crisis but a few other developing crises as well. We have a Mental Health crisis (a variety of issues), and Suicide has stabilized at about twice the normal level. Non-COVID medical conditions have been made worse by less care or the lack thereof. There have been a considerable number of divorce cases and neighbor complaints awaiting adjudication. And, there are the losses of small family (and larger) businesses that were struggling before the crisis. These crises are like a multi-front war beyond the one visible front of fighting for control of a new virus.

The Role of Fear in a Crisis

The fact that viruses mutate and sometimes become easily communicable is not a novel discovery for viruses. We have been trying to deal with their mutability for many decades. In the U.S., we are fortunate to have handled most of the previous threats adequately through a combination of action and luck. So, when a newly mutated virus with all its unknowns pops up, scientists dig in, and everyone else allows fear to rule their reason as experts reveal the facts ever-so-slowly. Unfortunately, fear makes us act like sheep who seem to be more than willing to walk over a cliff with our leaders who do not know much more than we do.

Would declaring Martial Law have helped?

In the beginning, the shut-down of our economy was billed as necessary to keep our healthcare system from being overloaded. And most people agreed that this was a good reason for the shut-down. But once it looked like our efforts were working to both “flatten the curve” and increase healthcare capacity, the powers that be started changing their tune. The authorities began saying that the shut-down was needed to stop the spread of the disease, which we now know to be impossible, something they strongly suspected even then.

Now we know that there is almost nothing we could have done short of a complete shut-down and forced quarantines right after Christmas to have stopped the spread into the US. But the danger was simply not known well enough until more than a month and a half later. Scientists now say that by February there was nothing that could have been done to stop the spread within the US, nothing, not even a nation-wide lock-down.

Once it became clear to the public that the danger of healthcare system overload was essentially past, and that the national and state governments were keeping us locked-down anyway, THAT is when the Lock-down Protests started. It is essential to know that even if the President had declared Martial Law to enforce a nation-wide lock-down, we could not have stopped the spread. And if he had declared Martial Law, there would have been immediate and wide-spread protests against him, even from his supporters. People would have taken to the streets all over the USA, in far higher numbers and with more militancy.

Listening to the “Health Experts”

Every time we talked about “re-opening” the economy, there were always voices who demanded that we listen only to the health experts and keep everything closed indefinitely. But doing that is like listening only to the oncologist treating your cancer and ignoring the cardiologist treating your heart disease. We would do best not to ignore either of them.

Health experts concern themselves rightly with slowing and stopping the spread of disease, and its ultimate control or eradication. They do not concern themselves with the economic health of nations, nor with even the over-all well-being of people. These professionals have their narrow areas of expertise, and we should listen to them for information in those areas. But to listen only to them can be a huge mistake and can itself become life-threatening.

“If it saves just one life…”

We have heard this empty argument over and over. This argument is in support of a “science-based” Political Policy that cannot save lives, and policy never has. Politicians make new “policies’ all the time, but if they cannot convince people to follow them, they might as well spit into the wind. What the phrase, “if it saves just one life” really says is, “I am willing to sacrifice the poverty and even the life of many other people, to save just one life.”

The sake of “just one life” has been used often in this crisis to justify such policies as the ticketing and fining people being responsible in the parking lots of their churches, in parks, on beaches, and even in their own front yard. And, over-zealous politicians have also encouraged citizens to Rat on each other as the Nazis in Germany did, instead of using their considerable influence to get people to pull together voluntarily.

Safety at the cost of Liberty

Being on an emergency or wartime footing allows leaders to use people’s fears to martial forces only available in those circumstances and enables them to assume powers that U.S. citizens would not usually tolerate.

This is how war, any “war,” devastates liberty. And this is how politicians use a “good crisis” to increase their power incrementally over peoples’ lives.

Our best way forward will be dependent on having the freedom and information to make informed decisions for ourselves and with our families about the level of “re-opening” and precaution that is appropriate for each of us, and when. If you have multiple risk factors, your decision might come down to getting a haircut or becoming deathly ill?

No “Orders” of power-hungry politicians faking concern will keep someone inside who is determined to get out and about, or force people to go to work and place themselves and their families at unnecessary risk just because some politician says it is “essential.” So, we must take responsibility for ourselves and our families, and do what is best in our own informed and considered opinion. And, we must also consider what we need to do to be good family members, neighbors, and coworkers.

There are Leaders, and there are Politicians. Leaders take a few years of their lives to serve the people and lead them gracefully through difficult times before returning to private life. Politicians look for a lifetime of lucrative public employment while putting their “service” on public display and prioritizing their re-elections (and personal power-lust). The term “lucrative” may not apply to their salaries. Still, it does apply to their numerous benefits, retirement plans, perks, inside investments, speaking gigs, book deals, and the favors they receive from grateful special interests to the very limits of the law (and beyond).

Politicians have proven that they will put our families and us at risk to exercise the powers they hold and tell us it is “for the greater good” regardless of that statement’s truth. Yes, acknowledging that “The People” have the Right to decide such things for themselves in a free society seems messy and inconsistent But the alternative is to willingly accept what is essentially a Police State where bureaucrats make decisions for everyone, and Politicians turn law enforcement and possibly even the military against us for “our greater good.”