This was a short paper I wrote for a sociology class in 2005.

The purpose of this is to look at recent statistics on who receives Social Security Disability Benefits and how much. It is hoped that a better understanding of the overall picture will result from this treatment. All data are from the fiscal year 2003.

Social Security was set up by government during the depression to care for Retired people after a lifetime of labors and has since been modified and expanded to include a wide range of disabilities and benefits to dependents. The question is whether or not a system that continues to grow in bureaucracy, number of beneficiaries, amounts received, and scope of coverage can long sustain coverage of any kind.

Results:  The data showed that only 3.6% of the total resident population of the United States of America in 2003 ages of 18-64 received Social Security Disability benefits; and that Tennessee was above the national average at 5%. The average benefit received for all disabled beneficiaries was $820. per month with the average for men being $919. and for women being $706. Workers who became disabled received on average $861. while Widow(er)s received $564. and Adult Children received. $567. 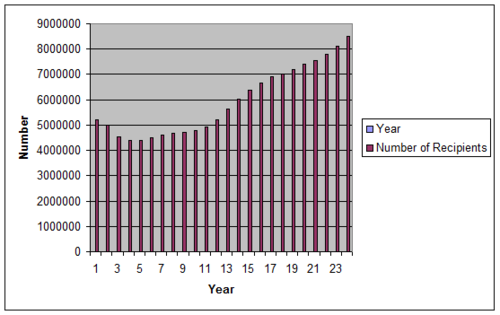 Conclusions:  The number of Social Security Disability beneficiaries has been growing at an ever increasing rate over the last 20 years (1983-2003) and was 8.5 million people from 18-64 years old in 2003. While some people are removed from eligibility on occasion, the total number grows as do the amounts received by each.

The Social Security Administration over the last 30 years has also spent between 70 and 80% of every dollar it receives for its own overhead and administrative costs according to the federal Office of Management and Budget.

With only 3.5% of the working age population on disability, it may be some time before failure of the program is imminent. If the number of people covered, the amounts received, and the costs of administering the program all continue to rise, that point in time may come sooner than anyone can guess or predict.